Are you settling a bar bet? Arguing reptile facts at a family holiday? Debating something somebody posted about snakes on social media? Standing around the water cooler talking about a cool YouTube clip?

Don’t you worry, we’ve compiled a list of some of the most frequently asked questions about our favorite belly-crawling friends.

Q: What is the DEADLIEST SNAKE IN THE WORLD? Or more accurately: What snake has the MOST POTENT VENOM?

A: The Fierce Snake or Inland Taipan (Oxyuranus microlepidotus) of the remote deserts of Australia. However, only one human fatality is on record.

Q: What snake KILLS THE MOST PEOPLE every year?

A: It is either the Asian Cobra group (Naja sp.) and/or Saw-scaled vipers (Echis sp.) but there is no way to know which for sure.

Q: What part of the world sees the most snakebites and deaths?

These areas are rural and relatively undeveloped, it is warm and people frequently don’t wear much in the way of footwear. Medical care can be many miles away on foot.

Q: What snake has the LONGEST FANGS?

A: The Gaboon Viper (Bitis rhinoceros) of the forests of western Africa. They are known to have fangs up to 2 inches long. The Gaboon Viper also packs a large quantity of pretty powerful venom

Q: What is the MOST DANGEROUS (not deadly) Snake in the world?

A: The one that just bit you. Taipans, Mambas, King Cobras, Eastern and Western Diamondbacks, Ferde lance, Bushmaster, and so many more depending on who you talk to.  But, OK, even though we feel there are far too many variables to really be definitive, we know you want an answer. So, if we absolutely must pick one, we will go with Taipans and brace ourselves for an outcry from other "experts."

Q: What is the LONGEST SNAKE in the world?

A: The species of snake that gets the longest is the Reticulated Python (Python reticulatus) from Southeast Asia. Although the record is considered to be 33 feet this information is more anecdotal and has not been proven to be true. We feel in reality, no python over 25 feet has been reliably verified.

Q: What about ANACONDAS? I thought they were the biggest snakes?

A: Anacondas are considered to be the heaviest of all snakes topping out at over 300 pounds but not the longest.

Q: What is the longest snake in the US?

A: According to published scientific literature, the Eastern Indigo found in the South is the biggest snake in the US. That same research says they reach a maximum of 8.5 feet.

That said, just recently, August of 2015, we were given a Bullsnake that is a genuine 113 inches long, which blows the Indigo out of the water. We intend to publish this record -for Bullsnakes as well as the largest snakes in the US.

Q: What snake has the MOST POTENT VENOM IN THE US?

A: In terms of toxicity three snakes might qualify, the Midget Faded Rattlesnake, Mojave Rattlesnake, and the Coral Snake. Different studies have shown different results but all 3 have powerful venoms.

Two well-known researchers who attended a lot of rattlesnake bites over the years believed that most of the deaths attributed to Western Diamondback Rattlesnakes were actually caused by Mojave Rattlesnakes, which look very similar to Diamondbacks.

Q: What is the most dangerous snake in the US?

A: The one that just bit you…We would say the Eastern and Western Diamondback Rattlesnakes because of their size, venom gland size, fang size, temperament, and human encroachment on their habitats.

Q: How many people get bitten in the US every year?

A: There are roughly 4,000 venomous snakebites in the US every year.

Q: How many people die of snakebite in the US every year?

A: Normally, fewer than 5 people die of snake envenomation per year.

Q: Are Copperheads and Cottonmouth Water Moccasins as deadly as I hear?

Definitely not. Although a bite from either species can be life-threatening and the bites are unbelievably painful, very few deaths have ever been recorded.

A: What is the BIGGEST RATTLESNAKE species?

Q: What is the biggest Rattlesnake in South Dakota?

A: In spite of more wild stories, our rattlesnakes don’t get very big. In South Dakota (as well as the surrounding states) the biggest rattlesnake is the Prairie Rattlesnake (Crotalus viridis). The most recent published record is from 1991 and is listed as 57 inches. However here at Reptile Gardens we were brought a large number of rattlesnakes from Montana in the 1980’s that were larger. Unfortunately we did not publish this but we had several snakes in the 65 to 70 inch range. The record Prairie Rattlesnake from this group went to a researcher and measured an actual and genuine 72 inches.

We already have the world's largest collection of rare reptilians, but we would also like to showcase the world's largest reptiles as well. If you encounter one of these mammoth creatures in wild, your first thought should be to escape. And fast. If you decide to attempt a capture, which we highly recommend you don't, bring your bounty to Reptile Gardens for a handsome reward.

Deliver these rare and record-breaking specimens to Reptile Gardens alive and in good condition and we really will pay you the ransoms listed to the right. We only pay for the reptiles on the list and the pay is not on a sliding scale (a 4 foot rattlesnake won't net you $12,500 'cause we have plenty of those as it is and 10 foot crocodile won't bring in $40,000 either, so don't even bother). Capturing one of these magnificent animals would indeed be a world record - the only type of find consistent with our already world famous collection. 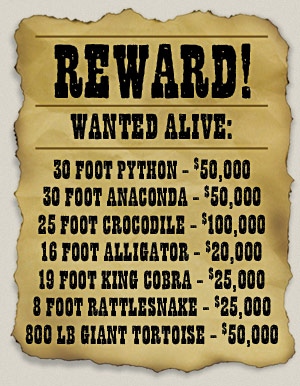 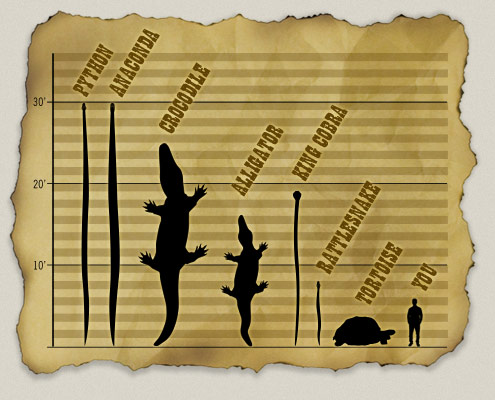 *Reptile Gardens is not responsible for lost limbs, pets or children during the capturing process.