How many types of venomous snakes live in South Dakota?

South Dakota has just one venomous snake species, the Prairie Rattlesnake (Crotalus v. viridis). Many people believe some of our other snakes are venomous but luckily for most of us, such stories are myths.

That little snake you just found under a log or in the garage is not a coral snake. Coral snakes are not found within about 700 miles of South Dakota. What you have is a shy and harmless Pale Milk Snake (Lampropeltis t. multistriata). They are fairly common but rarely seen due to their secretive nature.

The legend of the Puff Adder...

The most common venomous snake story we hear is about the "South Dakota Puff Adder." Some people even claim this snake is so deadly its mere breath can kill you.

The snake referred to in this instance is the Western Hognose Snake. This innocuous little snake is quite harmless to most everything except its favorite food, toads. They are renowned, however, for their remarkable defense display.

If threatened a Hognose Snake will hiss and puff up its head (hence the Puff Adder moniker). If that fails it will roll over on its back, loll out its tongue, and pretend to be dead. Unfortunately the poor snake doesn't quite have the whole dead act down quite right. If you roll one onto its belly, it will promptly roll right back over on its back.

We get many calls, especially in the spring and early summer, about baby rattlesnakes. Many times the snakes people are seeing are not rattlesnakes at all. Two local species have young that are colored much like rattlesnakes for this very reason - to fool predators.

Baby Bullsnakes and baby Eastern Yellowbellied Racers (also known locally as Blue Racers) bear an uncanny resemblance to young rattlesnakes. They will coil up, hiss, strike, and even shake their little rattle-less tails. The first thing we ask callers to do is to look at that tail of the suspected snake:  Here in South Dakota it’s fairly easy to tell which are dangerous and which are not - If the tail comes to a point like a toothpick it would be one of our native harmless snakes.  If the tail has a rattle or if it rounds off like the end of your finger it is likely to be a prairie rattlesnake.  Even baby rattlesnakes have a small rattle but the tail is very short and stumpy until it sheds a few more times and adds a few more segments.

I just saw a huge snake!

Hearing wild stories about huge rattlesnakes or other local snakes in South Dakota, the facts are simple:

The world record for a Prairie Rattlesnake is right around 6 feet long. But, in all the years we have been in existence, we have never seen a true 6-foot Prairie Rattler. In South Dakota, the average length for a rattlesnake is 2 to 3 feet with a really big one topping out at around 4 feet in length.

The record size for a Bullsnake is reputed to be 102 inches. Since our beginning in 1937, we have never had one close to that size brought in. The average size for a South Dakota Bullsnake is around 3 feet; a very large one might be around 5 feet long.

(Coluber constrictor flaviventris)
Called "racers" due to their active, quick movements; these non-venomous, slender gray-green to bluish-green snakes range in size from 30 to 50 inches in length. They will typically slither to the safety of thick grass or brush when encountered, but if cornered or grasped, they will bite in defense. They can be found in central and western South Dakota (west of the Missouri River).

(Diadophis punctatus arnyi)
Found in the extreme southeast corner of South Dakota, this harmless snake is named for the yellow band that encircles its neck. The ringneck snake is typically slate gray, black or brown with smooth scales, giving it a satin-like appearance. They prefer moist woodlands as their habitat.

(Elaphe v. vulpine)
Measuring 36 to 56 inches in length, this is one of South Dakota's larger non-venomous species of snake and can be found in the extreme southeast corner of South Dakota. The head of a Fox Snake is usually unmarked except for a small design on top and may be light brown with yellow, orange, or reddish highlights.

(Heterodon nasicus)
Considered to be a rear-fanged venomous snake, they are not considered to pose any danger to humans. The Western Hognose Snake has a funny (upturned) nose or snout that they use for digging. These snakes are found throughout South Dakota and average between 18-30 inches long. Their bodies are chunky, and much heavier than most other snakes of comparable length.

(Heterodon platirhinos)
The Eastern Hognose Snake is considered to be rear-fanged, but any venom they excrete is not considered dangerous to humans and they are not inclined to bite. This medium to large snake ranges in size from 24 to 46 inches long with a very stout body. In South Dakota, they can be found in only a very tiny range in extreme southeast corner of South Dakota.

(Lampropeltis triangulum multistriata)
This medium sized, non-venomous snake is often confused with the deadly Coral Snake due to its coloration - light gray or brown ground color and bright to rusty red body blotches. They can be found in central and western South Dakota and through southeast South Dakota (west of the Missouri River).

(Nerodia sipedon)
Often mistaken for Cottonmouths or Copperheads, Northern Water Snakes are non-venomous. They can grow over 4 feet long and are brown, gray, reddish, or brownish-black with dark crossbands on their necks and dark blotches on the rest of their bodies. They are almost nonexistent in South Dakota, but have been spotted in a very tiny range in southeast South Dakota.

(Opheodrys vernalis)
Smooth Green Snakes are non-venomous, they rarely bite when handled and when they do, rarely break the skin. They are 12-22 inches in length, are a bright, brilliant green, and have smooth scales. They prefer areas with thick green vegetation. They have small, separate ranges in the western Black Hills, extreme southeast South Dakota, and extreme northeast South Dakota.

(Storeria occipitomaculata occipitomaculata)
Northern Redbelly Snakes are non-venomous. They are small, measuring 7-10 inches long and are easily identified by their red or orange belly. They live in a variety of habitats: boreal forests, sphagnum bogs, and northern and southern hardwood forests and adjacent fields. They can be found in extreme eastern South Dakota.

(Storeris occipitomaculata pahasapae)
Black Hills Redbelly Snakes are a subspecies of the Northern Redbelly Snake, and are also non-venomous. Most Black Hills records of these snakes are from the northern hills or in the granitic/schist formations such as the Harney Peak area. They can be found in the extreme western Black Hills, but also integrate with the Northern Redbelly in their range on the eastern side of the state.

(Thamnophis elegans vagrans)
This non-venomous snake is medium-sized with a robust body and long tail. The head of the Wandering Garter Snake is large and distinct from its neck. The snake’s upper lip, chin and throat are white or yellow and its eyes are moderately large with a round pupil. They have 2 ranges in South Dakota - one on the northwest edge of the state and one in the western Black Hills.

(Thamnophis radix haydenii)
The Plains Garter Snake is non-venomous and can be found throughout South Dakota. They are considered to be more docile than other garter snakes. The ground color is light brown to black with two alternating rows of black spots. Some have an olive green surface color in which the spots stand out especially well.

(Thamnophis sirtalis pareitalis)
The Red-sided Garter Snake is non-venomous, can be found throughout South Dakota, and is the most common snake in North America. The habitat of Garter Snakes range from forests, fields and prairies to streams, wetlands, meadows, marshes and ponds, and they are often found near water.

(Tropidoclonion lineatum)
This non-venomous snake resembles a small, colorless garter snake. They normally will not bite if handled gently. Their usual habitat is open grassland areas where surface cover is present, but they may also be found in semi-suburban environments, such as abandoned lots and cemeteries. They can be found in extreme southeast South Dakota.

(Pituophis catenifer sayi)
The largest snake in South Dakota, the non-venomous Bull Snake is heavy-bodied and ranges in length from 37 to 72 inches. Bullsnakes vary in temperament, some are docile while others react very defensively toward anyone who attempts to handle them, but despite their menacing attitude, they will not strike unless severely provoked. They can be found throughout South Dakota, except for the northeast corner of the state.

(Crotalus viridis)
Prairie Rattlesnakes are large, venomous snakes found in central and western South Dakota. They are heavy bodied and measure from 35 to 45 inches in length. These Rattlesnakes have a diamond shaped head which is set off from the relatively thin neck. The tail is ringed with a tan rattle at the end, distinguishing this snake from all others in its South Dakota range. 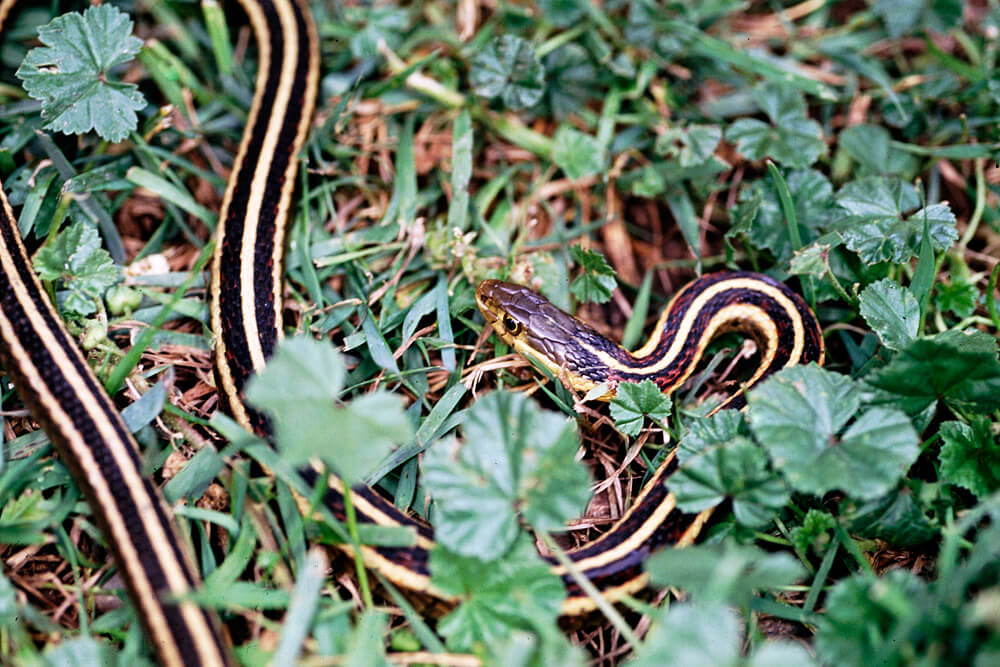 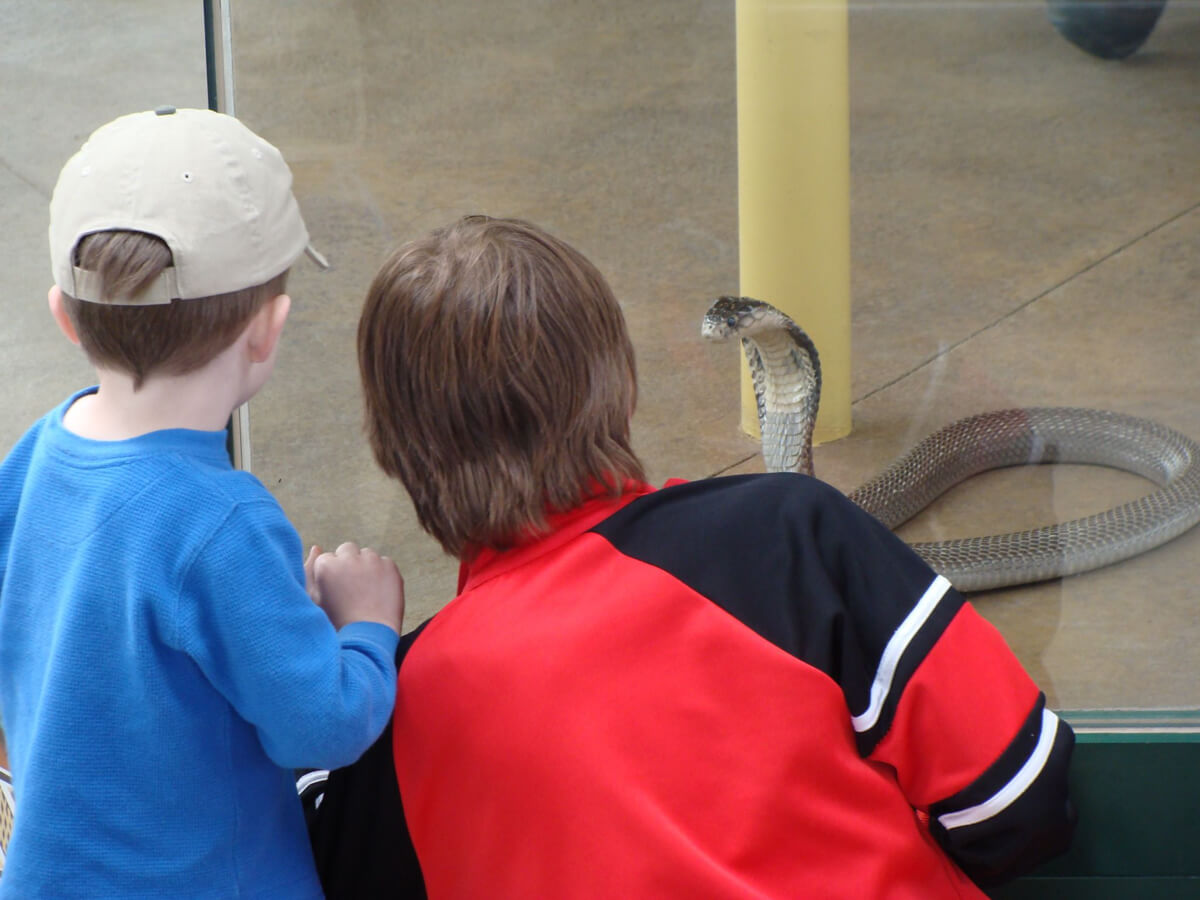 The snake show at Reptile Gardens gives you and your family an opportunity to have an up-close-and-personal experience with Reptile Gardens' snake ambassadors.  Pet our friendly Pythons!  Be sure to take a stroll around the Sky Dome and head to the upper level to see our collection of world’s deadliest snakes.