We get many calls from concerned residents and visitors to the Black Hills about the "Coral snake" they just found in their yard or while hiking. Coral snakes are highly venomous species of snakes native to the southern part of the U.S. There are also a number of species in Central and South America. US Coral snake species do closely resemble some species of milksnakes, including the Pale milksnake. However, our wonderful Pale milksnakes are totally harmless.In the case of US coral snakes vs the Pale milksnake, the old saying: "Red to yellow, kill a fellow - Red to black venom lack" holds true. But, I must add, with both milksnakes and coral snakes, this is not a hard and fast rule. 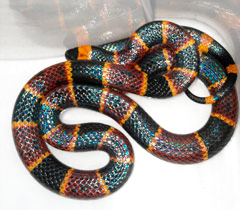 This is what a southeastern US Coral Snake looks like.

They use their bright colors to intimidate would-be predators and make those predators (and us) think they are Coral snakes. Bright colors, when found in nature, often indicate the animal either tastes bad or is potentially dangerous. The milksnake's color mimicry of the Coral snake is very effective in keeping them safe, except when worried citizens kill them thinking they are killing a deadly Coral snake. 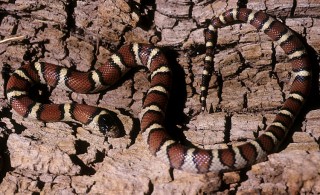 This is probably my favorite native snake species in South Dakota. Keep an eye out for them on walking paths and roadways. They often hang out under rotting logs or lumber and in other places they can hide and find their favorite foods. When you see them, don't harm them - enjoy these little rodent-eating machines! But, it is not just rodents. These snakes also feed on bugs, lizards and other snakes as well, including juvenile and young Prairie Rattlesnakes!! Small and wonderful, Pale Milks rarely get larger than 24 inches. Most of the ones brought in to us are about the size of a pencil.